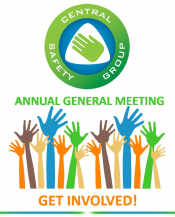 Central Safety Group's AGM on the 9th February 2021 was action-packed! (Well, as much as an AGM can be, that is.)

A motion to commence the process of becoming an Incorporated Association was passed, and a sub-committee has been formed to facilitate this. It's expected to take about 6 months to complete the process. The main advantages of this move are to establish a clear structure for the group as well as to protect individual members from legal liability.

Our long-serving President Alan Matthews formally resigned from the position (see the separate blog entry about this), and Vice-President Nan Austin was duly elected as his replacement. Congratulations Nan!

Due to the move to becoming an Incorporated Association, it was decided not to fill the role of Vice-President at the moment, nor to alter the rest of the make-up of the committee. The review of our group and roles within it means that the scope of the Executive roles in particular could change and we want to clarify those before asking anyone to put up their hands to join the committee.

Finally, two new Life Members were appointed at the AGM. Our Secretary Jane Loudon was the first of these. In 2014 when our then secretary John Knowles left the group suddenly due to ill health, Jane became our saviour by stepping into the role immediately without a second thought. She has since established herself as an invaluable member of the committee, particularly in her work securing a high calibre of speakers for our monthly meetings.

The other new Life Member is Marina Milankovic, who has been a committee member since 2006, served as Treasurer from 2008-2015 and, since 2016, has been Membeship Secretary. During the challenges of 2020 she played an important part behind the scenes to ensure that CSG could adapt to the changing situation.

To view the full list (and smiling faces) of our committee and Life Members, go to the About Us section of the website here.